Yes, the lakes are still frozen

Acoustic music legend John Hartford sang this about the Mississippi River: "it's too thick to navigate, it's too thin to plow." Lakes in Algonquin Park are in a similar state at the moment.  Despite the fantastic weather forecast, don't plan on canoeing in Algonquin Park this weekend. While there is some open water around the edges and few ponds are open, all lakes are shore-to-shore ice.

The good news is that most of the snow is gone, the woods are dry and open, there are NO bugs and it will be a beautiful weekend for exploring Algonquin Park on foot. The day hiking trails and backpacking trails accessible off Hwy 60 give access to some spectacular scenery and the pleasant temperatures will make for glorious walking conditions. 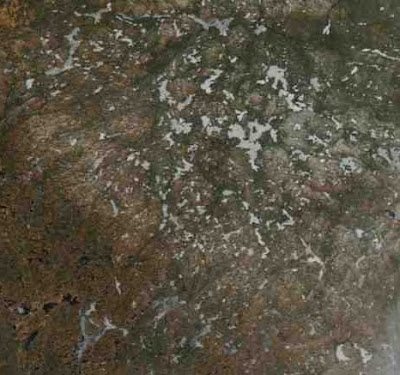 Don't believe me? Here's a clip from satellite imagery taken March 30.
Lake Opeongo is just right and up from centre. Lake of Bays is the
big, mostly ice-covered, lake in the lower left corner.
The satellite image above shows some interesting things. Clearly, all major lakes in Algonquin Park are frozen. Lakes in Haliburton County, well to the south, are still frozen (look at Redstone Lake and Haliburton Lake in the lower right). This image is "true colour," so I assume that the whitish stuff is snow remaining at higher elevations (then again, it could be unmelted frost). Note that the image is not oriented like a map and the "north-south" is roughly diagonal from upper left to lower right. To the left of Lake of Bays, you can see that Fairy, Peninsula and Mary lakes are open and Vernon has a big pan of ice floating around. In my experience, when the big lakes near Huntsville (like Fairy, Peninsula and Vernon) open up, Lake of Bays follows about a week later, Oxtongue Lake goes  three or four days after that and Algonquin Park lakes follow in another week or so. If that pattern holds up this year, ice out in Algonquin Park is at least two weeks away, if not longer (in my humble opinion).
Posted by Gordon Baker at 11:16 AM No comments:

Opeongo is going to Opeongo this summer!

We like getting emails from customers and friends telling us about heir adventures and what Algonquin Park means to them. This is a great one: 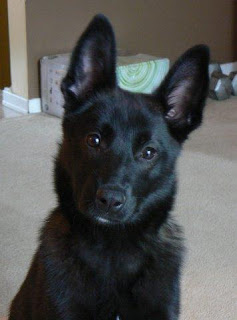 My name is Jessica H----. I met a colleague of yours at the Outdoor Adventure Show in Toronto. He said that I should email you as he enjoyed my puppy. I have attached a picture of my puppy, a border collie, lab, german shepherd mix. I named her Opeongo. I named her Opeongo after Opeongo Rd and lake. I have been coming to Algonquin Park since I was a young child. I first learned to canoe and kayak on Lake Opeongo. I have also been fortunate enough to see a moose rut take place off of Opeongo Rd., feed my first gray jay, see my first wolf and learn to love the wild world around me. It is because my parents took me there as a child that I went on to become a biologist and an avid outdoors-woman. I hope that my new puppy will become a dog that I will be able to take traveling with me in Algonquin Park. This summer I will be bringing Opeongo to Algonquin Park to hike and camp with and also to show her the lake that I named her after. My favorite dog and my favorite park!
Take care,
Jessica

Posted by Gordon Baker at 10:49 AM No comments:

The recent span of sunny warm weather has got many people thinking that spring has sprung. Most of the snow has disappeared, I've seen people in shorts, we've had calls and emails from folks thinking they would be going on a canoe trip this weekend and robins have been sighted in Huntsville. On top of that, the big lakes in Huntsville area, like Fairy and Peninsula, will likely be ice-free by the end of this week. Before you get too excited, take a look at today's weather forecast: 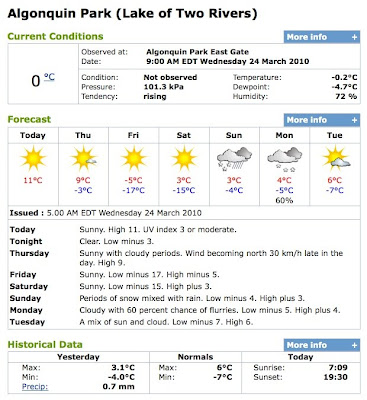 Things will be firming up a bit for the weekend! Now take a look at some pictures of Oxtongue Lake, taken this morning. I would estimate that the ice here is eight to ten inches thick and quite solid. Pounding with my foot, I could not break up the edge of ice by the dock. 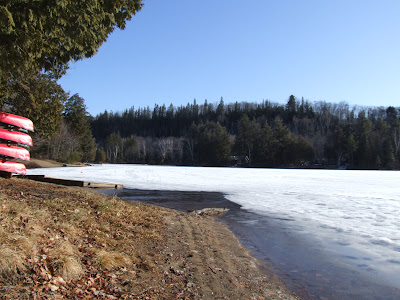 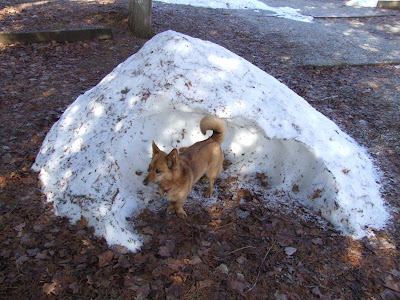 Utah checks out the Quinzee - not even suitable for a dog house! 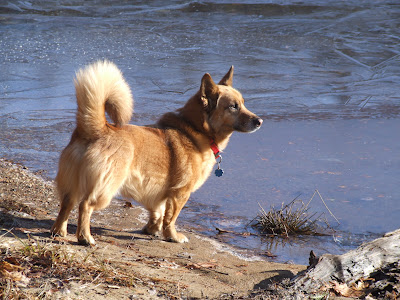 Even the open water was iced over this morning.
Where is a dog to get a drink?
Posted by Gordon Baker at 10:11 AM No comments:

Ice out frenzy has begun!

Someone called me the other day and commented on how that open water at the Opeongo Store sure looked inviting...

Ha Ha! They were looking at the Google Street View image in the previous post (see below), which of course is a frozen (pardon the pun) moment in time, of an unfrozen lake. This is not the case right now. Despite all the warm weather, sun and rain, lakes in Algonquin Park (and outside) remain securely frozen solid. Folks were cross-country skiing yesterday and came back with mixed reviews but the trails are still open. Many south-facing slopes are 90% snow-free though there is still knee-deep mushy snow in the woods. 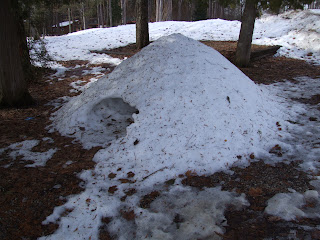 Due to its shady location the Quinzee built Feb. 19 is
still hanging in there on March 14 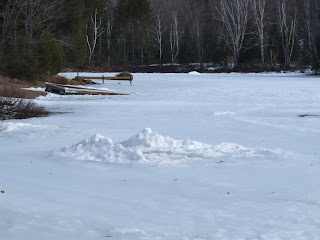 The Igloo, built on Winter Fun Day, has
suffered from exposure to sun, wind and rain

The same Igloo a few weeks ago
So, you ask, any predictions yet? Given the current state of snow and ice, you might think we are headed for an early spring. Then there is the fact that, only a week ago, my ice-out guru informed me that the snow pack was "very resistant" and that Algonquin Park lake ice is solid, high-quality ice. Gazing into the ice-crystal ball, I see that it is still mid-March, so anything can happen (including a major snow storm like the one we had on March 25, 2008), night-time temps are going to be below zero all this week and the current 14-day forecast is calling for a return to seasonal (as in coolish) temps later in the month. Hmmmm. 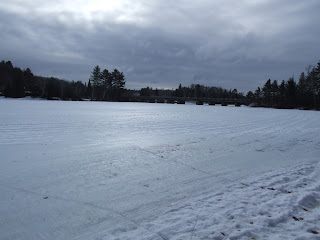 Gord's annual photo of the Oxtongue Lake bridge spanning a very frozen lake
My prediction is that it still too early to call and that you will visit our booth (# 4120) at the Toronto Sportsmens Show, March 17 -21, to chat about your canoe trip plans for this season. If you are a regular Sportsmens Show visitor, don't forget that the show has moved to the Metro Toronto Convention Centre! 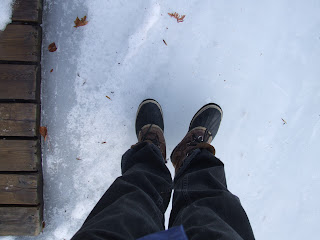 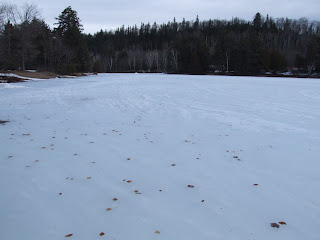 The unusual sight of leaves blowing across a frozen lake


Get in on the spring action!
Enter the Canoe Lake Ice-Out contest.
Posted by Gordon Baker at 12:50 PM No comments: