Boy, you take a few days off to get knee surgery and the world just keeps moving along. While I was sitting on my deck recuperating after ACL reconstruction on April 1, the combined effects of sun, wind and rain were working away in Algonquin Park. Fortunately, the intrepid reporters at Canoe Lake Ice Out Headquarters are on the job:

It looks like the ice went off Canoe Lake last night before midnight which makes it Saturday, April 3rd, 2010 and blows away the previous record of April 14th set in 1953.

Two of my official field correspondents, Hugh Statten and Charlie Plant, reported that it was "blowing like mad and raining" yesterday afternoon, and the ice was already off Smoke and Joe Lakes and was going out on Canoe Lake as they watched. It was pretty much all gone by 10:00 pm last night and I received confirmation from Charlie at 8:00 AM this morning:

"It is official. The ice is gone. In case there are any doubters I will get an official portrait done today of Hugh Statten, dressed in his chiefly robes and holding a copy of yesterday's Globe in front of the vast expanse of water that is now Canoe Lake."

Another record was set this year in that no one chose April 3rd as the ice out date and so we have no winner. But I am happy to give credit for being closest to John and Sandy Churchill who picked today, April 4th, and also to Doug Yandala who said "Early this year...April 1st...no joke!" (I hadn't even had time to update system to include  dates before April 6th -- so you don't see them on the predicitons!)

Stay tuned to the web site for more info over the next couple of days.

We have no reports on Opeongo or other interior lakes yet but will update this bog as soon as we do. The satellite images from the last few days are too cloudy to garner any useful information. 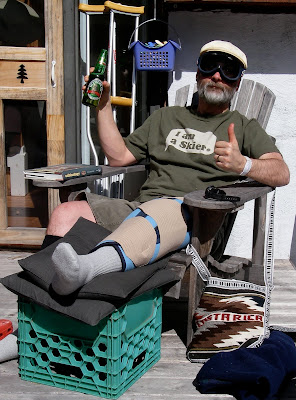 Your faithful blogger pondering icing his knee rather than ice on the lakes
Posted by Gordon Baker at 12:39 PM No comments: