Algonquin Outfitters in the local news

Our local paper, the Huntsville Forester, has kindly run a story on the upcoming showings of the Banff Mountain Film Festival World Tour. If you are stuck for a last-minute gift, tickets are specially sized to fit perfectly in a stocking.
Posted by Gordon Baker at 1:37 PM No comments:

I was trying to not say anything about it but the last week has been pretty depressing. After a blast of snow and cold weather in early December, we were all pretty excited. People were snowshoeing, ski trails were passable (though a bit wet underneath) and we were convinced that winter was here to stay. Then, out of nowhere, spring came again, with rain and mild temps, concluding yesterday with record highs in Ontario. It was 10 degrees C in Oxtongue Lake yesterday! Today things are starting to swing back to normal. The lake has re-frozen, snow is the forecast and the sun is shining. The forecast is looking good for a white Christmas and winter activities in Algonquin Park! 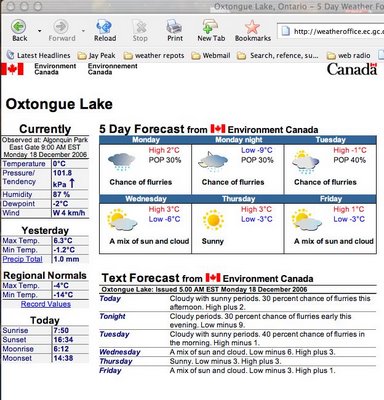 Snow in the forecast - finally!
Posted by Gordon Baker at 9:34 AM No comments:

All this mild weather has people thinking about canoe tripping more than skiing and snowshoeing. On one of my periodic scans of the Algonquin Adventures forums, I found two very interesting links. By the way, if you haven't discovered Algonquin Adventures, take a look. It is a very comprehensive and useful site with lots of trip planning information, route ideas, trip logs and more.

The first is a link to NOAA satellite imagery, updated every day or so. The link is here (thanks to "Markus"). Just click on the thumbnail that looks the least cloudy. You can zoom in a bit and pick out major lakes in the area (it may not be Google Earth but at least the images are almost live). It's a good test of your knowledge of Algonquin Park lakes. What a handy tool for ice-out canoe trip planning!

Here's another one of a 1908 Algonquin Park map (thanks to "Bob M"). While not recommended for navigation, it is very interesting to see old cultural features, place names, rail lines and especially different lake names. Algonquin Outfitters is very proud to possess an original version of this map from 1934. It is very similar, though with a few updates. Ours is framed and on display in the outfitting room at the Oxtongue Lake store. If you are interested in seeing this piece of park history, drop by and ask one of our staff to show you the map.

See you on Green Lake next summer!
Posted by Gordon Baker at 11:53 AM No comments:

Last June, writer Brendan Brady rented a canoe from us and went on a canoe trip in Algonquin Park. He and his son had a remarkable once-in-a-lifetime wildlife encounter. You can read the whole story on-line at MPNnews.
Posted by Gordon Baker at 3:29 PM No comments:

The task of selecting the films for our two showings of the Banff Mountain Film Festival World Tour has begun. Many people do not realize that each tour host gets to pick the films that are shown in their town. To help with this challenge, the organizers of the Banff Mountain Film Festival provide us with descriptons, reviews, audience feedback and short clips on a preview DVD.

At this point, I've made selections with the goal that each night will have a slightly different theme. Each evening may appeal to some more than others but still be enjoyable by anyone with an appreciation for great film-making, adventure and the great outdoors. Then there is the fact that you can't please everyone.

On Tuesday, January 23, the films will have a more action-oriented flavour, featuring skiing, snowboard, iceberg climbing, epic adventure, mountain biking and a fair bit of humour. The next evening, Wednesday, January 24, will feature films with more of an adventure travel and nature focus, with some climbing and snowboarding in the mix.

As of Dec. 20, we have selected seven films for each show. Film selections can change at the last minute. Here are descriptions (courtesy of The Banff Mountain Film Festival) and images from some of the films selected: 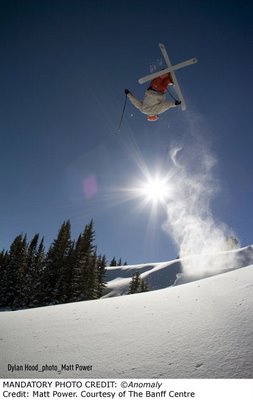 Anomaly, TGR's newest 16mm and HD ski and snowboard release, showcases the freakish and abnormal abilities of today's top athletes as they push the boundary of what is humanly possible.
Aweberg 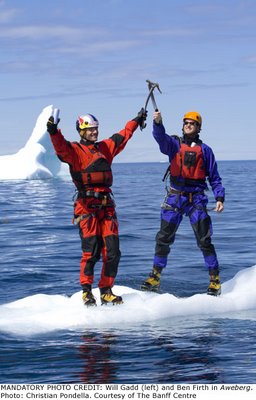 Will Gadd and Ben Firth are two top Canadian ice climbers. They thought climbing "awesome" bergs would be a lot of fun, so the Aweberg trip was born. The bergs looked great, but the reality was somewhat different. 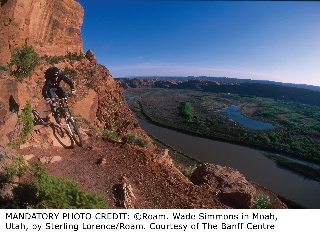 Roam is a mountain-bike film that follows the travels of the world’s top riders as they explore new places to ride, and visit some of the notorious meccas of mountain biking such as, Moab, UT and Whistler, BC. 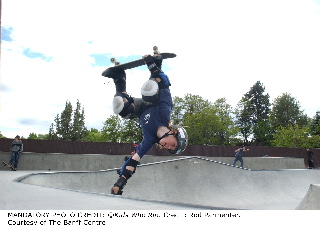 Patagonia - A Travel to the End of the World 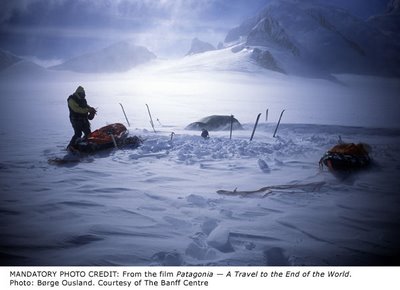 Attempting the first unsupported traverse of the Southern Patagonia Icecap, Børge Ousland and Thomas Ulrich start from the small village of Tortel in August 2003. After three days of paddling into the Patagonian fjords with two kayaks each, they reach the bottom of the Jorge Montt Glacier; from here they carry their equipment up and start skiing across the ice cap. This film is most of all about the spirit of adventure. Few expeditions have had to master so many different skills to reach their goal. 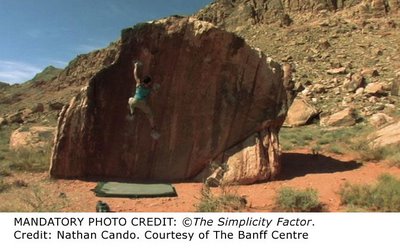 
Buy tickets on-line to this show 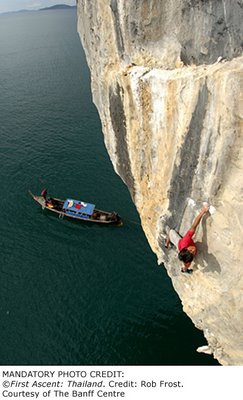 Steep towers of untouched rock jutting out of the ocean. And the best part is, with only the sea below you, there's no rope. Thailand is a dream come true for David Lama, perhaps the best on-site climber in the world, and purportedly the future of the sport. Amidst the exotic beauty of the Andaman Coast, Lama and friends take 60-footers into the drink, and bring deep water soloing to a new level. 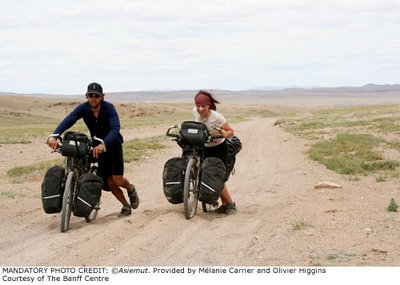 In 2005, Olivier Higgins and Mélanie Carrier went on their first cycling expedition - 8000 kilometers across Asia. In six months they pedaled from Mongolia to Calcutta, India, traveling through Xinjiang, the Taklimakan Desert, the high Tibetan plateau and the jungle of Nepal. Why? Not only to discover the world, but also to discover themselves.

Editor's note: Regular festival goers might remember Berserk in the Antarctic and Alone Across Australia from past showings. This film has been compared to those memorable films.

No picture available - visit www.corriefrancis.com for a taste
In an age of technological integration and urban life, people turn to the natural world for a wilderness experience. What draws us to the remote corners of land and sea when we realize something in our lives is missing? In this animated documentary, New Zealanders attempt to fathom their deep, personal connection with their land.


Yes to the No 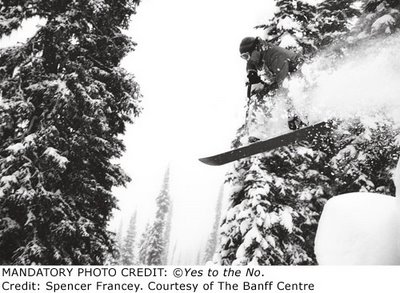 A look into the sport of noboarding, which is snowboarding without the use of bindings. The sport of snowboarding was essentially started by skateboarders and surfers looking for a winter alternative to the two summer sports. Now that snowboarding has reached its peak, there is only one way to change the way snowboarding is done, and that is to take the bindings off the board and really surf the mountain.

Ride of the Mergansers 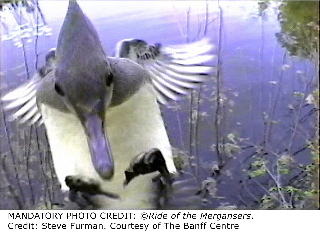 The hooded merganser is a rare and reclusive duck found only in North America. Every spring, in the Great Lakes region, the wary hen lays and incubates her eggs in a nest high in the trees. Just 24 hours after hatching, the tiny ducklings must make the perilous leap to the ground below. Ride of the Mergansers brings this hidden drama to the screen.

Buy tickets on-line to this show

Posted by Gordon Baker at 2:48 PM No comments:

The weather forecast is predicting 15 cm of snow by the end of the day! Hopefully this will stay on the ground and we will be skiing and snowshoeing soon. The bay had opened up yesterday after some mild temperatures but is rapidly freezing over again.

The photos below show what accumulated in the first hour of today's storm. Driving conditions are treacherous at the moment as the snow is changing to ice pellets. 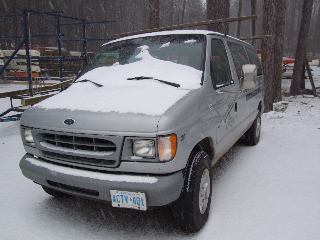 Now where did I put that ice scraper? 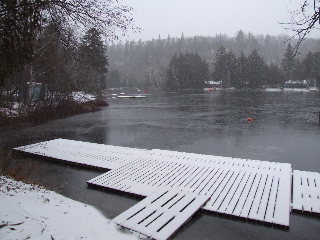 Bad day for canoeing...
Posted by Gordon Baker at 1:11 PM No comments: